It’s time to go there… 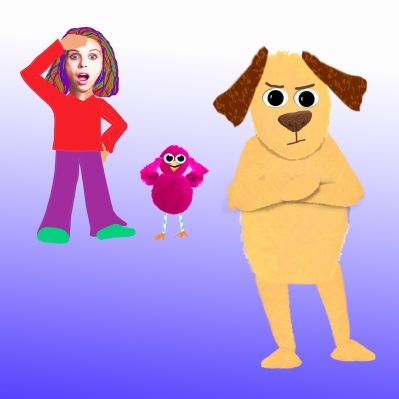 As happy as I was as a small child, I was an angsty ANGSTY teen!!! I can’t help but look back and laugh at myself now, but I still respect the fact that those years are a part of my story. When I have those “angsty” days I try and pour those emotions into a creative outlet. This is when writing can be so very therapeutic.

Purge your Emotions onto the Page

At this point in your writing, you should have a topic, a core message, and a basic plot structure. Now, let’s inject some empathy. If you are writing a story with characters not only do you have to connect with the protagonist, but you should also find a connection with the antagonist as well. Really put yourself into your characters shoes, or hooves, or flippers or what have you…

Do you remember that popular picture book from the 90’s called The True Story of the 3 Little Pigs by Jon Scieszka?  It’s the classic tale of The Three Little Pigs told from the Big Bad Wolf’s perspective.

This was one of my favorite books at the time. I loved that it was from the “bad guy’s” perspective, the antagonist’s point of view. It was my first exposure to the concept of the “anti-hero” I am always drawn to stories that have well-rounded characters like this.

Sometimes it’s not even a character at all that is causing conflict for your protagonist.

Remember, whatever is keeping your protagonist from its goal is the antagonist of your story. It can even be as broad as a natural phenomenon like the weather. I have one story for example called “Lawrence the Lighthouse” about a lighthouse who is afraid of the ocean and in that story, the ocean is the antagonist.

Give thought to all moving parts and characters. Have empathy for all points of view and motivations. This will make you a better writer and storyteller.

Emotional Inspirations for The Shape Escape:

When I was writing The Shape Escape and writing the protagonist character of the Tiny Triangle I thought of all the times when I felt overlooked. Times in my childhood when I felt intimidated and bullied. I even thought about my recent journey to become an author dealing with powerful agents and editors who kept turning me down. I remembered the feelings I had of facing a seemingly uphill battle all the fear and self-doubt I had to overcome. I thought about the triumph and joy I felt when I achieved my goals. The little Triangle represented all of that to me.

So you add in all of those little details subtly like spices but also give your audience room enough to insert themselves into the character as well.

As for the Circle. I was totally that wild and crazy kid that had tons of energy and would literally bounce off the walls sometimes. This did not always bode well for me in social situations. And it made me really think about the motivations for my Circle. I created this whole back-story for the character in my mind. This shape is different from the others it’s bigger and doesn’t have sides. It moves through space differently and probably never felt like it fit in with the other shapes. I could totally relate to the Circle who is maybe compensating for feeling different and I thought that kids, and adults for that matter, could relate to this character as well.

It’s important to make the antagonist relatable or at the very least their motivations understandable to your audience. It brings a sense of logic to the conflict and order to the story overall.

Even if all of these little details don’t make it into the final cut of the story, it is still very important that you as the writer know your antagonist as well as your protagonist and that you have empathy for both points of view.  It totally comes through in the writing. And it will allow your characters to have more dimension and nuance in your final product.